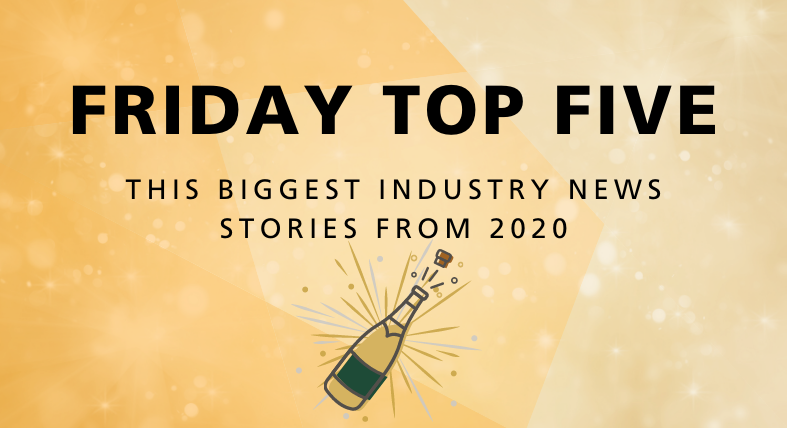 In this week's special edition of the Friday Top Five, we're looking back at the biggest industry news stories from 2020.

Back in February, before most of the world felt the affects of COVID-19, Legal Cheek published an article on what the next decade would look like for law firms. Despite the unknown and rapid transition to remote work that would follow the next month, the predictions the cited panel of lawyers made held up. Their consensus? Legal tech was here to stay. Unanimously, they agreed technology would continue to reshape the practice of law and help free up lawyers' time to focus on more stimulating work. Click here to learn why they believed core legal skills wouldn't change, how the Green Economy could come into play in the 2020s, and what the political and economic uncertainty could (and ultimately did already) bring to law firms in this decade.

In early June CBC reported that Ontario Attorney General Doug Downey had announced sweeping new technological changes to the province's justice system. Ontario's courts, which were set to reopen on July, were fitted with Plexiglas barriers, physical distancing markers and hand-sanitizing stations. Downey stated about 300 Ontario courtrooms had already been outfitted to hold virtual trials, where a judge would be in the room and lawyers and witnesses could join in remotely. At the time, Ontario's courts still relied primarily on paper records and fax machines to share information, but, according to Downey, court files would be digitized in the coming months. Since the article was published in the summer, Ontario courts slowly re-opened, however some hearings are still taking place virtually and others have been postponed to the New Year.

Remote eDiscovery Was In Vogue Long Before the Pandemic Began: eDiscovery Trends

Since COVID-19 began, a lot of people had to embrace remote eDiscovery as fast as they could. For Ricoh eDiscovery, the transition to remote work began some time ago. To give some context, in 2007 more than 98 per cent of data collections performed by us were done onsite. Today it is less than 5 per cent. Read Doug Austin's commentary from July on how we've been able to stay ahead of the curve over the past decade on eDiscovery Today.

Via The Canadian Bar Association — National

According to an article published in October by The Canadian Bar Association's National, there’s an opportunity for young lawyers who embrace analytics to ride the next wave of careers in the profession. With less of a need for an army of young lawyers to do manual document review, a uOttawa professor said the profession and law schools need to train lawyers to fill the gaps emerging as technology replaces tasks that once consumed many billable hours. Learn what new opportunities could lie ahead and why accessing data could be the key to future lawyers' success here.

The federal government is threatening to impose fines that could add up to millions of dollars on private companies that violate Canadians' privacy. In mid-November, CBC reported that Innovation Minister Navdeep Bains introduced the Digital Charter Implementation Act; one of the biggest shakeups in Canada's history of privacy law. If the bill passes, companies could face fines of up to five per cent of global revenue or $25 million — whichever is greater — for the most serious offences. Bains said the legislation provides for the heaviest fines among the G7 nations' privacy laws.

Read Sean Lynch's recent blog, What the New Digital Charter Implementation Act Means for You (and Your Data), to learn more.