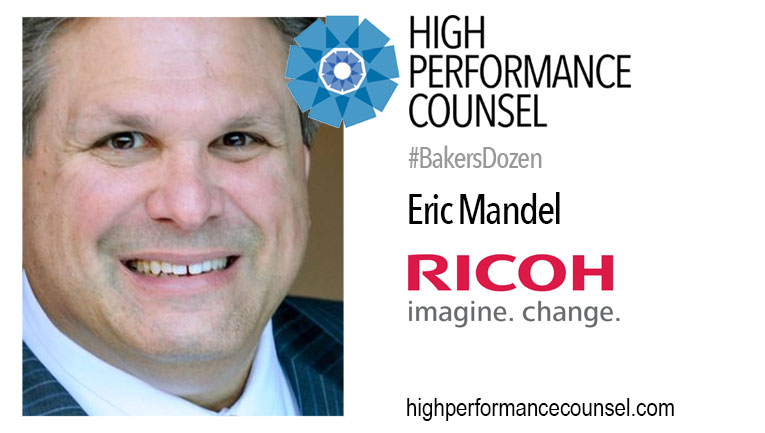 This post was originally published on High Performance Counsel and has been republished here with permission.

TELL US A BIT ABOUT YOURSELF AND HOW YOU CAME TO BE IN (OR A CUSTOMER OF) THE LEGAL BUSINESS SERVICES FIELD?

I was a computer geek that went to law school, long before the term “electronic discovery” existed. People kept asking me if I was going to do Computer Law – which had no meaning. I practiced law for a few years before moving into the business side and then stumbled into an opportunity to join a start-up eDiscovery service provider in the beginning of 2006. The rest is history.

WHAT DO YOU DO FOR A LIVING RIGHT NOW?

I joined RICOH in March 2017 as the Director of Solutions Architecture and member of the eDiscovery leadership team.  I was promoted at the end of October into a broader, and frankly very cool, corporate role.  Now I get paid to strategize about innovative ways to deliver services related to information governance, cyber security, eDiscovery and data privacy, and to work with a really great team of professionals to figure out how to best develop and harness the resources of a large international company to turn a vision into reality.

WHAT HAS BEEN YOUR GREATEST TRIUMPH/SUCCESS IN THE LEGAL SERVICES FIELD AND WHAT DID YOU LEARN FROM IT?

I’ve been fortunate to have many wins, big and small, while working as eDiscovery counsel. Two cases stand out for me, one on the plaintiff side and one the defense side. In both cases, we were getting stories from opposing counsel that painted perfect pictures of innocent, good-faith behavior.

In the first case, involving the plaintiff’s side, I helped to set up a system that allowed us to get through many millions of documents and find the evidence to prove how a cartel attempted to fix a market for a major consumer product. The result of that work was one of the largest antitrust settlements in history.

The second case, involving the defense side, our client was facing a 9-figure loss if a court was to accept the plaintiff’s story. Using Nuix and PureDiscovery (the precursor to Brainspace), I analyzed massive volumes of ESI to uncover what really was going on behind the scenes. What I discovered was, shall we say, inconsistent with the limited evidence that Plaintiff’s side were presenting. Lead merits counsel then brought me to second chair a couple of key depositions where I got the satisfaction of watching plaintiff’s witnesses (not to mention their counsel) as one exhibit after another was introduced dismantling their case.

I’m a bit of an idealist. I believe that justice is about the search for truth and restoring order and balance. I also believe in the premise of FRCP 1: we have an obligation to ensure the just, speedy, and inexpensive determination of each matter before the courts. eDiscovery, when done well, provides a means by which we reach those ends. If you have the right technology, combined with good process and highly capable analysts, the data will speak for itself.

DO YOU THINK THE LEGAL INDUSTRY IS HEADED IN THE RIGHT DIRECTION, THE WRONG DIRECTION – OR WHICH DIRECTION?

I think the legal industry is heading the same direction of most of industries: automation driven by AI and robotics. It’s not right or wrong, but it is massive fundamental shift to humanity as the move from sustenance farming to industrialism and the development of the wage-based economy. At some point soon the so-called developed world is going to have to face the question of what happens when machines can do our work better and for less capital expense than a human?

Read the full interview at highperformancecounsel.com